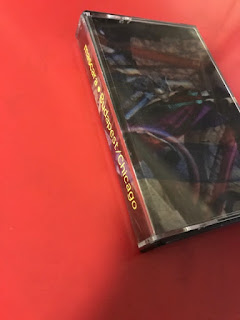 Right on. This is pretty rad bedroom industrial mixed with some drones. Sometimes it sort of just washed over me but most of the time there would be some strange rhythmic moment that would really capture my attention. Once my attention was captured the occasional vocal would then legit terrify me. There are some samples and I’m always a little meh about those but it works. It’s a killer piece from a group I don’t think I have ever heard of.
The tape itself looks pretty good. I like the art but it’s very subtle. The type is kind of throwaway but it’s not bad at all. All in all it’s pretty good.

Posted by Demian Johnston at 3:20 PM