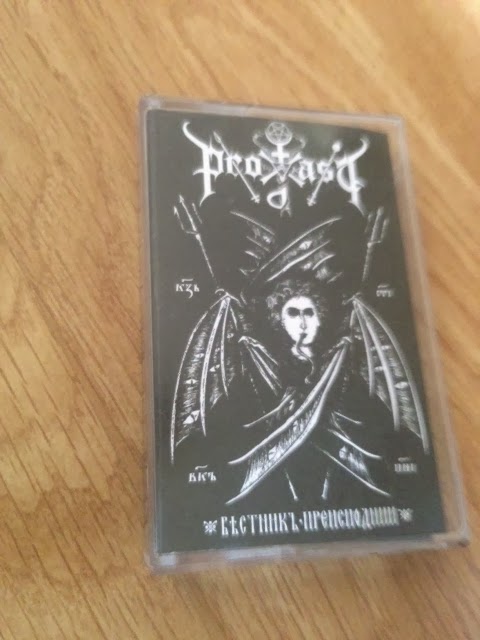 We argue about Black Metal. All of us. What is and what isn't black metal is something we have impregnated message boards with for years. We are so insecure in our ideas of black metal we worry that if we say we like Wolves in the Throne Room that means we are ignorant of what true black metal is. Some of us like to talk about bands like Liturgy or Deafheaven as being black metal or at least the new wave of black metal and that starts a whole other argument. I for one do not think of those prior two bands—Liturgy or Deafheaven—as being black metal. They certainly use the vocabulary of black metal—the screeching vocals, tremolo picking and blazing drums—but they lack the main, most important ingredient. Atmosphere. Without that instantly identifiable atmosphere of icy-cold, empty, haunted, horror-filled depression you are not within the limited confines of black metal. That's why Burzum can put out a record of keyboards and it's more blackened than the Explosions in the Sky at 500mph style of Deafheaven. I'm not trying to talk shit here. I own all those Deafheaven records and I enjoy them but they are about as black metal as Ned's Atomic Dustbin. So what is the new wave of black metal? I don't know, nor do I actually care but Propast is certainly refreshing to these old ears. This is fast brutal black metal that I think belongs right next to the best record of last year, Inquisition's Obscure Verses for the Multiverse. It's a bit different but it contains the same frenzied angst and the same level of musicianship that blew me away. Propast also has only two members, a drummer and guitarist/singer. Aksinomantijan and Kasapin respectively, and they are able to capture the atmosphere of hopelessness and channel it into some wonderfully hateful tracks. The cassette itself looks great with both roman and cyrillic text. The j-card is embossed with something wicked-satanic and the design is solid. All tracks were recorded in Serbia and I think that adds to the mystique of desperation, at least for me. They might not be living in cabins in the middle of nowhere, never sure when the next World War is going to turn their life into a scene from Come and See but they certainly understand darkness and horror way more than someone who complains about having to connect between BART and MUNI too late at night. I guess I look at it in the same way I look at Hip-Hop. If I  hear a rapper is from Detroit I am a lot more interested at what he or she has to say as opposed to a handsome white guy from Seattle. I guess that is what this whole conversation is about. Perspective. I have a feeling this conversation will not be ending anytime soon.

Posted by Demian Johnston at 12:31 PM No comments: