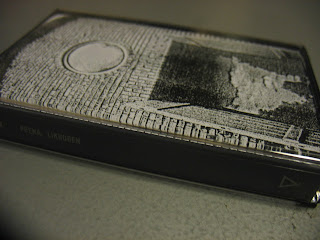 Tzadik, Editions Mego, Hydrahead, Handmade Birds, Southern Lord, RRRecords, Debacle Records, American Tapes. These are just a handful of labels that at one time or another you may have basically bought everything they put out. These labels often had a very specific point of view and you knew that if you liked 75% of their output then taking a chance on a release you hadn't' heard of from them wasn't a bad idea at all. It's time to treat Belaten as this. This label has been releasing consistently amazing cassettes for a bit now and the fact that I already have a big hole in my collection of their releases is bumming me out. I will be posting a few more reviews from them shortly as I get through this massive pile but for now I will talk about Poena. Poena is a duo from somewhere European (wicked research right?) This 30 minute piece was recorded in the morgue of an abandoned mental institute. It pretty much sounds like what you think it would sound like, horrifying. Howls, drones and scraping are punctuated by an almost audible darkness. It's scary but it can't be as frightening as recording this piece was. Remember when you first saw the Blair Witch Project and it was a little disappointing? Well, at the end of the movie when they are in the house and shit gets pretty creepy there is a few minutes where everything gets real effective and scary. Mainly because you can tell the actors themselves were actually scared themselves. You can tell that it's a pretty real sense of fright and it translates. This recording has the same effect.

All Belaten cassettes have a uniform look and it works great. Black and white artwork with excellent minimal text. I'm pretty jealous.


Posted by Demian Johnston at 12:50 PM No comments: 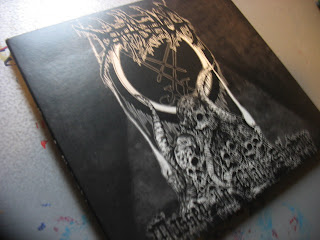 So a band called Deathstench on a label called Black Plague productions is not exactly going for subtly. This is heavy, dark, heavy, heavy, dark, dark metallic drone. This may sound like a criticism but almost the entire record sounds like the Sunn0))) track Cursed Realms (of the Winterdemons). I mean almost every track on this record sounds directly influenced by not only Sunn0))) but that track in particular. It's not bad, in fact it's my favorite Sunn0))) track on my favorite Sunn0))) album. So in a way that is very good. It's not the most inventive or varied album though, which are two things I look for pretty often. Although halfway through this cd you do get a track that has some blasting, blackened drums. I would love to hear more of that. God damn, this is fucking dark. If you are a fan of Sunn0))) or better yet, the criminally underrated and unheard Ardent Vein, you are going to dig this.

The art is pretty cool, in that silly metal way. Skulls, candles and portals to blasphemous dimensions are all on the cover. There are six more panels of that. It's pretty cool drawings but my real issue with the layout is how the text is handled. It's just center aligned (mostly) and all the type has that annoying black stroke around it. Actually some of it is actually transparent as well. I would love to see some better typography here.

Posted by Demian Johnston at 5:01 PM No comments: 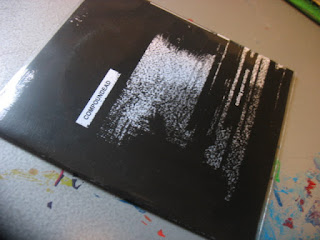 This drone record is all about the textures and your feeling on this is how you feel about textures. For me the first two tracks are subtle, gorgeous collections of tones and grinding textures. Maybe there is some bass in there, maybe some synths but it's very well done. The third track is a little over the top and doesn't work quite as well for me but it;s still pretty good. It just doesn't feel enough like either a compliment or a contrast to the other tracks. it feels like a different project all together. Still not bad.

It's simply put together but it's quite nice. I am all about the black and white layouts and this is another one from Sincope that works pretty well. Visually it utilizes textures as well and in that was it works. Simple use of helvetica in a vey loose grid. Maybe the text could be tighter in it's grid but I still think it's pretty solid.

Fans of dark grating drone, this is for you.


Posted by Demian Johnston at 4:45 PM No comments: 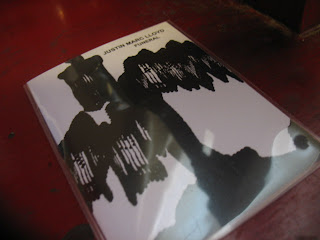 I have missed JML. He moved away from Baltimore and ended up in Chicago, making Chicago all the better for it. Justin has been making amazing noise journeys for some time now and they just keep getting better. This one is four tracks that go from feedback heavy rhythms to pops and cracks that sound like an alien campfire. Reminds me of some early Birchville Cat Motel lathes that came out many years back. I mean that in the best possible way. It's a killer selection of one of today's more prolific noise artist.

It's a cool little package. Small yet larger than usual sleeve for the 3" that is covered in this odd black and white artwork. Decent handling of the type. Nothing to complain about. I even loved the spraypaint on the cdr itself. I kind of miss that stuff… 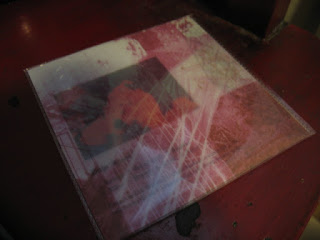 Sujo is the work of a very talented man by the name of Ryan Huber. I say very talented because this album, while remaining cohesive, is so varied and interesting that I am not sure what part to be more jealous of. The song writing, the guitar playing, the programming, the sound in general.Musically it exists in a drone and post rock world, similar to Nadja and Pyramids. I would say fans of these two acts will find Sujo on their short list of bands to own everything by. I am very glad to have found this one. I am a fan.

This looks fucking great. Translucent vellum cover and a full color insert house a stamped cdr. It's very attractive and professional but obviously made inexpensively. Obviously designed by someone who can solve problems visually. This is what you guys need to strive for in packaging.

Posted by Demian Johnston at 10:45 AM No comments: 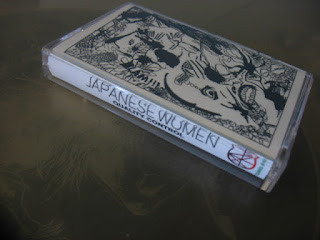 Another god damn perfect album from Japanese Women. Purveyors of something called Dankwave and making music that makes me fucking jealous. This is dirty, harsh, heavy, noisy intensity–the kind of music Converge might have played if they had started out drinking gasoline instead of putting x's on their hands. I think the closest comparisons might fall somewhere between Black Flag, Infest, Converge, Akimbo and the Locust but I would say this is heavier, noisier, more raw, more intense and less goofy… perspectively. Japanese Women need to get in a van and only stop touring when they have decided they hate seeing each other. They owe it to this shitty, shitty musical landscape of ours to help fix us, or ruin us.

It looks crazy. Just like the music. It's a big foldout j card with a comic of sorts drawn on it. It's super weird but hopefully they will make shirts with this scrawling all over them.

Posted by Demian Johnston at 4:37 PM No comments: 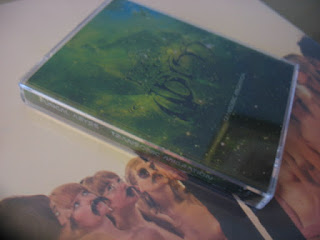 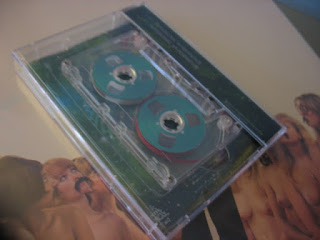 This is one hell of a way to end my recent illness. A psychedelic journey, bouncing off clashing, crashing and contrasting waves of guitars, holding on for dear life to a three piece rhythm section and finding myself basically baptized in a giant green fireball. Fungal Abyss, which is basically the band Lesbian, with Nathan Smurthwaite (Abodox) and various stand in musicians and vocalists, has been cutting a swath across Seattle's psyche for a few years now. This cassette is an excellent example of how these players can improvise huge epic pieces that never feel too self indulgent. These conductors are still aware that this train has passengers. It's awesome and hugely impressive. This recordings features extra percussion by Sam Yoder.

It looks awesome. It's packaged in one of those oversized Norelco style cases with a clear tape that has little green reels. The artwork and design are done by the illustrious Andrew Crawshaw doing what he does best which is this seamless photo collage thing that is very impressive and appropriate.

So stoked to have this.


Posted by Demian Johnston at 4:34 PM No comments:

My family and myself have been battling this fucking virus that has been going around so I haven't really had much time to review things this week. I am hoping to have it kicked in the next few days and everything should be back up and running. There is so much killer stuff to share with you.

Demian
Posted by Demian Johnston at 12:02 AM No comments: 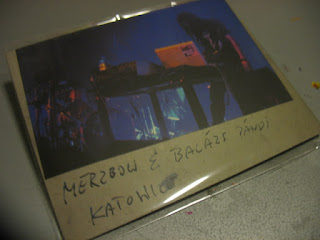 Anytime I receive anything in the mail that says Merzbow on it I get a jolt to my brain. My first real noise show was Daniel Menche, Masonna and Merzbow in Seattle in the mid 90's. It changed things for me and rearranged my brain. This cd is made up of a live set that was performed in Poland in 2011. It has a killer free jazz meets total audio destruction. I wish I could have been there. Thankfully, it sounds really good as well. I am assuming this was recorded off the board because it sounds almost like a studio recording. I have linked a youtube sample below.

Pro-printed covers and a cool appropriate layout full of hand written text that I assume came for items found around the actual show.


Posted by Demian Johnston at 6:23 AM No comments: 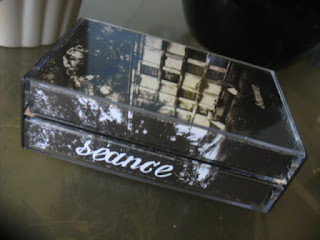 This is a beast. About 100 minutes of some of the best artists in Noise, HNW and Power Electonics. This would be the perfect introduction to contemporary extreme experimental "music". In fact you should probably pick this up for yourself, of course, but also for that friend who told you they were getting into cassettes again but keeps buying forgettable indie nonsense. Tapes are wonderful but they are less of a format for the sounds and more of a compliment. Anyhow, enough of that before I start rambling… This is full of amazing acts so pick it up.

It looks killer, two inserts inside one of those weird double cassette norelco boxes. The kind that used to hold live Iron Maiden cassettes. It's good...

In fact here is a little youtube ad for you:

I should also mention that as far as excellent compilations go Worthless Recordings released as awesome VHS video comp last year titled Videodrome. Again, amazing contemporary experimental artists but this time you get visual interpretations as well. If you own a VCR you owe yourself this one as well.

Posted by Demian Johnston at 5:35 AM No comments: