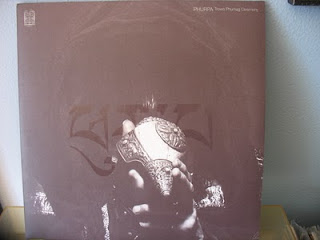 This is almost an education. Phurpa is a Tibetian monastic ensemble that started out in Moscow led by Alexei Tegin. The sounds on this record are all rooted in a form of throat singing called tantric rgyud-skad throat singing that is the from a pre-Tibetian religion called Bon. With the addition of bells, cymbals, chimes and drums this group creates an emotional and hypnotic swirl of classic eastern and middle eastern music. Originally released on cd, this vinyl pressing sounds unbelievably clear. The layout and packaging is by Stephen O'Malley and is an gorgeous as you have come to expect. This also happens to be the first record on O'Malley's new vinyl imprint, Ideologic Organ. Necessary.
Posted by Demian Johnston at 11:14 AM No comments: 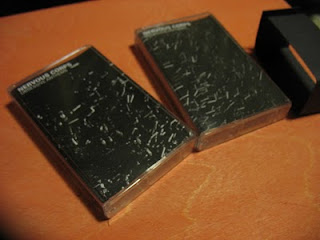 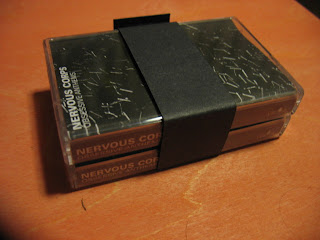 Excellent double cassette of mostly HNW from the clean shaven half of Blue Sabbath Black Cheer, Wm. Rage. This is four pieces spread out over two cassettes that, to me, seem to make one big piece. The first cassette starts with a seemingly never ending landslide of distortion titled Anthem II. There is no Anthem I on this release. The B side continues the onslaught but with a totally different tone. There is an almost musical note behind the wall on this one. The other tape continues the same trajectory of distortion and oppression except for the final track, Hatred. Hatred stands out the most on this release. It's a similar beast as the other tracks but it's more subtle and slow. It sort of stews. The whole thing is brutal in it's sound and artwork. Black tapes with artwork on both sides, simple j cards in cases that are bound together in a black paper strap. Limited to 20 copies. The label's website is down but I put a link to their Big Cartel page in the right hand column. Good luck.
Posted by Demian Johnston at 10:26 PM No comments: 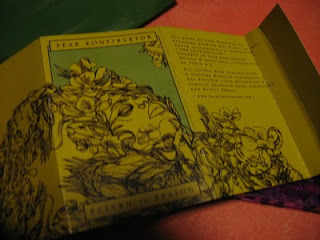 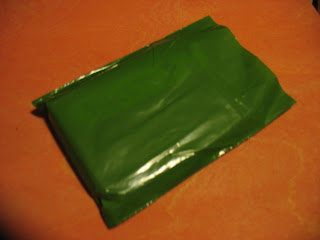 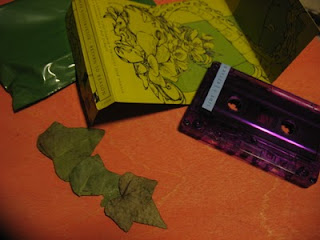 Really amazing work here from both the composer, the illustrator and the label. This is an example of when collaborations between the audio, visual and the fabrication really come together. The sounds on this cassette are gorgeous and troubling drones. Moments of possible field recordings add an organic and uncontrollable feel. Trains maybe. Wind storms…  it's hard to say but it creates a completely realized world. This is really well done. Highly recommended. I also want to mention how nicely done the artwork is. The illustration is amazing black and white line work  by Artaksiniya and the design looks as if it was handled by Steve, who runs the label. They are both clearly skilled in their approaches. This run of 30 copies is packaged in a green bag with a full color double sided, backwards folded J card and some actual foliage. I guess there is a version of this release that comes in numbered tins with an extra tape and a ton of plants packed in there… I assume in time they will break down but that will just be even more perfect for this release.
Posted by Demian Johnston at 10:34 PM No comments:

Strange Notes/Sweet on You split cs 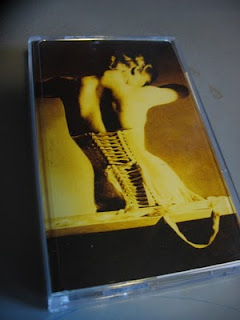 Fuck, this is why HNW means Harsh Noise Wall. Both acts on this both total destruction. It's overwhelming and punishing audio fury and I am so glad to have heard it. Clocking in at five minutes each I feel this is the perfect amount of noise for both pieces. You are left wanting and kinda hurt. Pick this up immediately, everything on this label so far is great and way too limited. There is only 27 of this release in the world and considering both acts on here got copies, the label probably keeps one and I got one…  well, that probably is about a third of the pressing right there. Good luck.
Posted by Demian Johnston at 8:19 PM No comments: 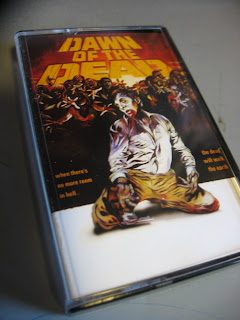 I am really starting to love this label, Worthless Recordings. First of all they do amazing shit like put all of the movie, River's Edge, on audio cassette and make it limited to 17 copies (I must see if they have any more as this reminds me of when I was little in the 1980's and we didn't have a vcr, I would record movies on tape all the time. I wore out my Red Dawn cassette by listening to it every single night for a whole summer.) and then they are doing this excellent trilogy of cassettes by Burial Ground that are dedicated to three George Romero zombie films. I know zombies are kinda everywhere these days but that doesn't make them any less great. Especially those early Romero movies. I could go off on a tangent about how the Walking Dead TV show is superior to the comic or how World War Z had the potential of being the best zombie film of all time but now is going to completely suck shit, but I will resist. In fact, lets actually discuss the audio. Burial Ground deliver a c32 of pure HNW. It's wonderfully executed with just a touch of dynamics to keep your ears engaged. There is maybe some harsh vocals in there, especially at the end, but it's hard to say. It's HNW in the way that Slates, Dried Up Corpse and Taskmaster are. It's gorgeous. I am not a fan of single sided cassettes. I think it's weird. Why not just put the same thing on both sides? I guess it's an aesthetic choice and maybe it's cool or something but rewinding is my least favorite part about owing a cassette. That is why i always listen to the whole thing. Still a very strong release.
Posted by Demian Johnston at 8:03 PM No comments: 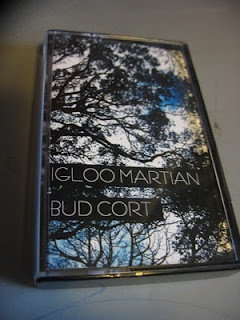 Igloo Martian wins my favorite new band name award. It has that random weirdness that would totally draw me to a show if I saw that name on a flyer. Igloo Martian is a piercing if not slightly subdued example of HNW. There is some overall swaying dynamics throughout the piece that almost give it a verse/chorus/verse feel that I am sure is not there. It's almost an audio mirage. The moments where the sounds change their shape to sound like incoming artillery is my favorite. Bud Cort is an awesome actor. He was in Harold & Maude so I know you know him. It is doubtful to me that this Bud Cort is the actor but I appreciate the reference. This side starts with a sample which, regardless of the sample, usually kinda rubs me the wrong way. I am not totally sure why…  Anyhow, this is also HNW and it's totally awesome. Thick, brutal and never-ending. All in all this is a solid release. Simple j cards and minimal packaging.
Posted by Demian Johnston at 6:24 PM 1 comment: 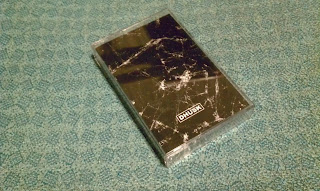 Absolutely. Yes. Very pleased with this one. This is what I am always on the lookout for. Dark, bleak and hopeless. This exists in the same place of my mind for me as Blue Sabbath Black Cheer and Emaciator. It's that sounds that feels like you are trapped in the belly of a hulking freighter as it slowly rumbles towards oblivion and all you can here are the distant sounds of the engine, crew and whatever hellish flotsam is smashing against the thick hull. When people try to put music to hell in films I really wish they would take a listen to stuff like DHUSK. This would fit well in an early David Lynch film as you can hear some Eraserhead similarities in there, but it is much less dramatic and more powerful. You feel like these sounds are always going on somewhere. It's actually sorta terrifying. Go get this. There are only 20 copies… which is crazy for something this good. Good luck.

dBpm "Music to Fuck to" cs 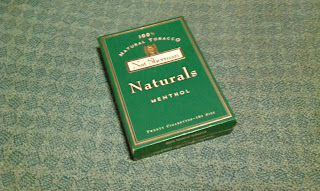 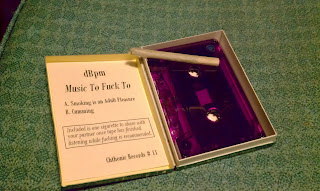 I love the idea that some weirdos out there might actually fuck to this. Although we are both weirdos, my wife and I would probably not be that into it. Dead Meadow? Yeah, we can rock that but gritty drone? That is probably not going to happen. For those few couples out there that could truly fuck to noise and drone this may be up your alley. Figuratively. This cassette is actually pretty short, probably about 10 minutes per side, so in that way it's probably pretty realistic for most people to fuck to. Both sides contain some beautiful if not slightly harsh waves of drone. The first of these sides comes in waves so huge it sounds like you are listening to this while on a giant pendulum. The second side is a bit more straight forward in it's delivery but a bit more potent. It's a great release musically. The packaging is also noteworthy. The cassette is packaged in a reclaimed cigarette box with a real hand rolled cigarette inside. The insert has all the info and is designed to fit perfectly with it's box. Well done. Really an extra point for the execution here. Definitely check this one out.
Posted by Demian Johnston at 10:02 PM 1 comment: 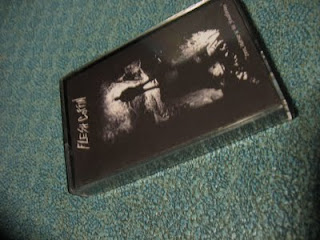 Jesus Christ. Where does Flesh Coffin get to record? This is another onslaught of just pure focused destruction. Mountains of smashing plate glass and dump trucks full of old bed frames explode from a huge wall of pure distortion. It's pretty awe inspiring. This is very much in line with the last release I reviewed from Flesh Coffin. It's dark and heavy HNW punctuated by some fierce smashing of belongings. Thank the Elder Gods. This is another worthy release from Out of Body Records, limited to 100 copies. Go.

Posted by Demian Johnston at 9:47 PM No comments: 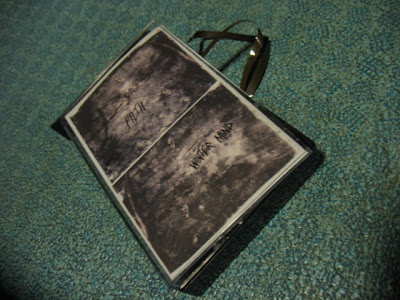 Filth is pretty brutal noise. It's lo-fi, pulverizing, hypnotic noise that constantly breaks apart and reforms into something slightly more fucked up than when you last had a handle on it. It's dirty and blown out and almost comforting. It reminds me a bit of Self Communion or maybe Windscale. I want to say that is is very KVLT but I am too old to know what that really means. I know this tape is dark, harsh and uncomfortable. There are some pretty heavy vocals throughout but they get to be a bit much at times. In that same way that Black Metal vocals can some times overwhelm the music, the vocals on here sometimes overwhelm the noise. I know some people love this effect but I always felt like vocals are more for contrasting other sounds and when vocals are too loud it kinda makes everything else sound kinda weak. That is not really as issue throughout this release though. Only in a couple spots. All in all this is a solid release from a clearly fucked up mind. The packaging is fitting. Mine arrived with the case broken and chopped up bits of magnetic tape spilling out. Appropriate to say the least. The artwork is well done, in fact Out of Body Records has a cool aesthetic in general that carries over their releases. Check this label out.
Posted by Demian Johnston at 9:07 PM No comments: