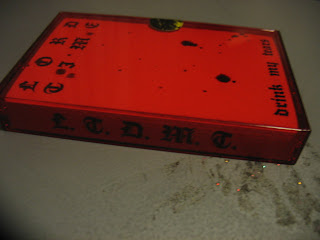 Thank Jesus for Lord Time. Lord Time is able to take the sub genre of bedroom black metal and constantly do something brand new and interesting with each release. There is thought in these releases and I love that. This is long. Like maybe two hours. It moves from blazing black metal to bizarre noise segues to droning strings and synths but the movements are random and unexpected. It's probably one of my favorite Lord Time releases yet. I would love to see this reissued on a series of 7"s. I hope Lord Time never stops.

The cassette itself is letterpresses black on white paper and then covered in blood. It's brutal. To think he releases 100 cassettes and covers them in his blood. It's kinda a lot of blood. The tape looks red because it's in a translucent red jewel case. Everything is held together by a sticker that you must break, which when you do means that you have forfeited your soul. Sorry.

Never pass up anything from Universal Consciousness or Lord Time.

Posted by Demian Johnston at 1:06 PM No comments: 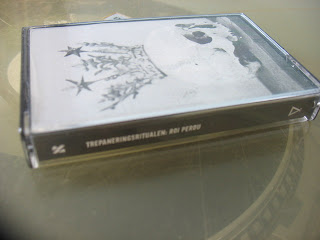 My first exposure to this group was a cassette on Hanson Records that I was way into. At least I am now. I replay a lot of my Hanson cassettes because they are all pretty much amazing. Just don't mix up them up… Anyhow, this is an excellent release of Trepaneringsritualen's spiritual drone atmosphere. Subtle drums and low notes carry an ill sense of unease into your room. It's scary but also incredibly enticing. I strongly recommend this.

Looks great and fits in with the consistent look that Belaten enjoys.

Definitely grab one of these.


Posted by Demian Johnston at 12:24 PM No comments: 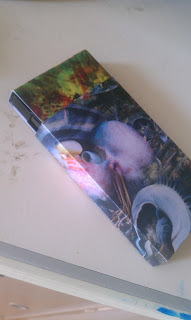 There has been a thankfully large amount of splits between these two groups lately. The cassette and a compilation on Dead Accents (my label), a 12" and this cassette on Black Horizons plus some random low run cassettes on Readymade Records—which is At Jennie Richie's label where they often release 5-20 copies of any one item. This is a long release which has two huge tracks of droning exceptional work. Like all pieces from either of these artists I must say get this.

The layout is pretty simple but the packaging is stunning. Two full color O cards that fit within each other, covered in beautiful artwork. This is an article piece of art and I would be lying if I said I wasn't a little jealous. Amazing.

Posted by Demian Johnston at 12:13 PM No comments: 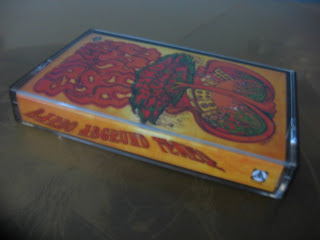 Another cassette from Fungal Abyss that is a serious psychedelic adventure. This is like reading John Carter paperbacks in your parents basement while enjoying the waves that come from smoking a bale of marijuana. These people play so well together that you can't help but be in awe of these improvised epics. You can't really go wrong with any of Lesbian's output. The Fungal Abyss pieces are no exception.

Great spaced out artwork by Darwin Rodriguez that perfectly compliments their logo by Scott McDougall. The type inside is a little hard to read at the size it was printed but it's still well handled. All in all this is a solid release.

Yeah, shoot yourself into space.

Posted by Demian Johnston at 12:11 PM No comments: 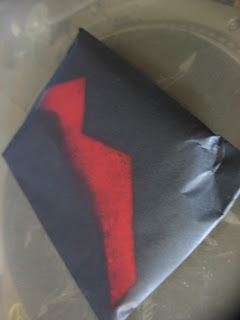 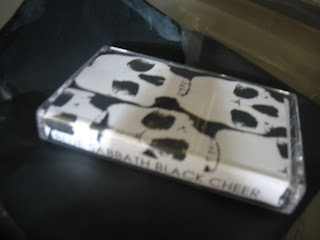 Fuck. This is a two sided audio holocaust.

It's packaged in a black envelope that has been spray painted and that you have to tear open to get the cassette out. I guess if you were a total freak you could steam it open like a suspicious, neglected wife in the 1950's but fuck it. The point of this is imbedded on the magnetic tape. The layout is rough, hand-cut and punk as fuck. I like that. There is a fine line between doing things like this that look authentic and awesome and things that look like they have been done incompetently.

Posted by Demian Johnston at 11:50 AM No comments: 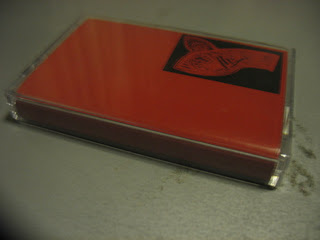 This is a wild little noise & electrical acoustic trip. One side is squelching synth manipulations and the other is this quiet little bit of tape loops, bells and scratchings of some sort. It's quiet and very effective. I actually like the second side quite a bit more. Not that the first is bad but this second side gives you a sonic illustration of what textures in music can really do.

The design is clean and simple with a nice use of helvetica. Solid. I like little details how even though the art and text are on one side of the paper, they still went through the effort and expense to copy the other side red. It looks like they care.

Posted by Demian Johnston at 11:34 AM No comments:

Wrath of the Weak "Solace" cs 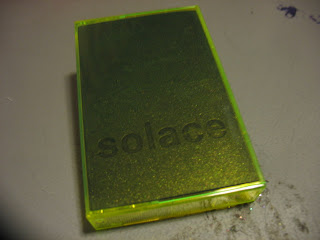 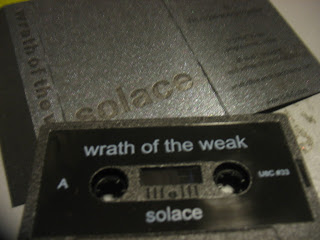 I feel honored to review the last release from Wrath of the Weak. If you don't know about them/him then consider yourself so lucky to be able to hear the entire catalog for the first time. Bedroom black metal with a whole lot of shoegaze and dense noise covering gorgeous and heartbreaking melodies. This release is the most heartbreaking of them all. The long repetitive drones and noise just barely covers some of the most beautiful and crushing sounds I have heard in a log time. Turn this up loud and kill your house plants with a crushing feeling of longing and sadness. I am going to listen to this over and over again. I am going to constantly hope that this time, the music won't stop.

Of course it looks great. Universal Consciousness does an amazing job every time. Letterpressed covers with xeroxed inside artwork make for a killer combination of texture and mood. This cassette comes in a neon green clear case. It's so cool that my 3 year old has stolen the case. It's beautiful.

Get this right now.

Posted by Demian Johnston at 8:32 PM No comments: 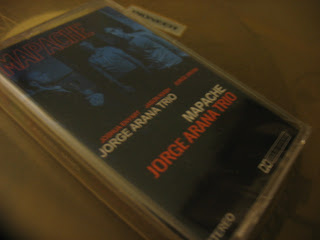 This is not the only cassette that I am way overdue on reviewing but it one of the ones that I am most bummed about not getting to earlier. Jorge Arana Trio is jazz.  Absolutely. As far as which genre of jazz though… well, that's a little harder to nail down. There are strong elements of fusion and free jazz but there are also elements of noise, pro rock and metal on this recording. It lives somewhere between Dave Brubeck, Dazzling Killmen, Trevor Dunn Convulsant, Faraquet and The JanMichaelVincentCarCrash. It's fucking awesome! Super fast and erratic at times this recording is really impressive. I am pretty blown away to be honest. Never boring and not at all self indulgent, they seem to want to play music for themselves and the audience that might be listening. It's playful, clever and heavy and the approach to song writing never feels forced or overly improvised. It's a good balance. The recording itself sounds really good as well. Damn good.

The cassette looks good and brings to mind the best of the Blue Note layouts. That look is maybe a little too much of a tell though. It almost looks like the layout is wearing a "jazz uniform". I forgive it though because it's well done.

Posted by Demian Johnston at 6:20 PM No comments: