Blvck Ceiling
Void
I Had an Accident Records 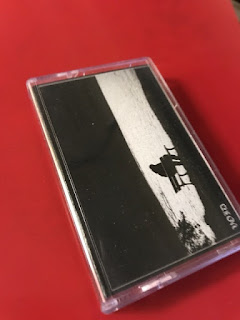 I am not sure I am qualified to review this. I will say that I was definitely not expecting it but I have no idea what genre to call this. Sort of noisy electronic music, a little hip hop, a little straight up power electronics and a little bit trip hop… I don’t know but it’s pretty killer. I feel like those dudes on AntiCon have been dying to make a record like this for years and never quite got there. It’s impressive and massive. It never sits in the same groove for too long and wears a lot of different hats as far as genres are concerned. I don’t know but I am intrigued.

The layout is super simple and works pretty well now that I have heard the music. It’s total juxtaposition. Sadly they did this nice job on the outside and left the inside blank which I feel was a mistake. With all the black and a title of a record called “Void” I think if they just had a nice black flood printed on the inside it would have been striking. Now it just sort of looks like the cassette was a throwaway. Sometimes blank white on the inside doesn’t bother me but on a record like this kinda needs a bit more care.

Posted by Demian Johnston at 11:27 AM