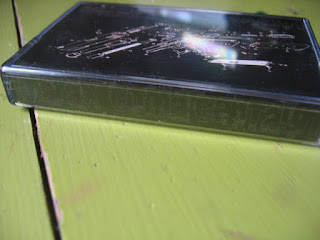 So here it is. A test of my capacity to handle samples. The first side of this tape starts off with Marax doing some of the most interesting HNW I have heard in awhile. It's tough, twisted, scary and totally brutal. It's also peppered with a ton of samples. To say peppered might be an understatement. It's "peppered" the way an unfortunate convenience store clerk may be "peppered" with buckshot during a botched robbery. It's almost a radio play. Maybe it is actually. That would be kinda cool… but I just can't get into what I am hearing. If it was just the samples on one track and just the noise on the next I could totally get behind this but I just don't like it. I know some people will fucking love this though. I am like that dude who fucking loves peanut butter and kills for chocolate but throws up at the thought of a Reese's Peanut Butter Cup (my old roommate and Rorschach guitarist, Keith Huckins is that guy). I love Marax's work and this seems pretty personal. It's all about suicide so I guess if you are going to make noise "about" something you can either just say it's about suicide, you can write lyrics and sing over the noise or you can have samples accompany it. I guess this is pretty effective and it's super well done but I just don't dig it. At the end of Marax's side you get a track that is almost free of any samples and it pretty much rules. I guess Marax is peanut butter to me. Coma Centauri's side also starts with some fucking killer HNW mixed with just enough stutter to keep in interesting. There is also some odd use of sampled loops that are not quite the same and the samples of people talking but are more along the lines of odd music and tape manipulations. It's pretty interesting and kinda gets into that electronic vibe. Like I almost imagine that this person could also be into dub step or something but it's damn crazy. There is no real narrative through this as there was on the Marax side so I am not sure how this is exactly about suicide either. The track titles mention Jack Kevorkian, having a right to die and being generally depressing so I guess that is it. There are some subtle samples here and there. They fit in pretty nicely with the noise in general but when I hear FDR's familiar voice it kinda looses me. Maybe I need a more open mind because I bet the average noise fan would fucking love this. Packaging looks nice. A little 90's in the type treatment but it's definitely solid.
Posted by Demian Johnston at 8:40 PM

Email ThisBlogThis!Share to TwitterShare to FacebookShare to Pinterest
Labels: 2