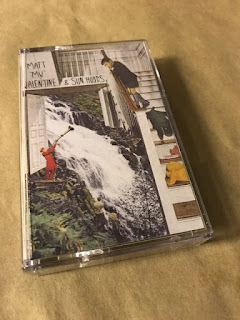 This is PSYCHEDELIC. Also, great. This has that element that I think all space-rock/psychedelic music has and that is the feeling of traveling. This feels more cinematic than even a score to a film because this tells the story itself. It’s not the support for the story. I guess if I could sum up Matt “MV” Valentine in some probably inappropriate comparisons I would say it’s a little like Devandra Banhardt if he wasn’t so into himself and had half of Eternal Tapestry and half of Hawkwind backing him up.
It does go on a bit long, like I feel like it’s an awesome trip across the stars but then when we hit the first gas station on venus Matt seems to just hang out in the snack aisle for a really long time. I mean, it’s awesome being on venus but… Sun Hoods definitely have this dark middle eastern classical vibe. The modern touch of it reminds me of Master Musicians of Bukkake a bit and that is a good thing. The darkness that is sitting below this is kinda chilling and I wish i could explore it more but it’s really solid. Great cassette all around.


The artwork fits quite well once you hear the music. It doesn’t immediately make sense to me but then when I get into it the collage work is pretty great. The type is fine. Totally works. Nice job.
Posted by Demian Johnston at 10:22 AM