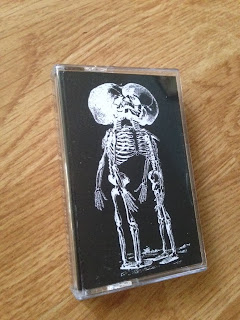 Both amazing acts constantly putting out brutal shit. When they collaborate like this it gets even more fucked up.

You need to be a freak about both of these projects like I am.

Posted by Demian Johnston at 2:03 PM No comments: 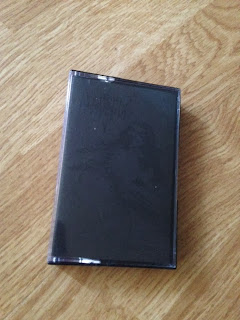 This is one of those situation where i bet this is totally amazing live but something is getting lost in the recording process. I like what I'm hearing. Intricate, yet subtle guitar playing that conjures some really dark and brooding moods but it is so quietly recorded that I can't really hear it without turning it up and then it's losing something. Maybe just mastering would help out a lot. I really mention this because I run into this a lot with my own recordings. I have put out some poorly mastered things into the world and this is much better than more of what I have done so I feel I should qualify my criticism with that.  Either way there is some excellent playing on this.

The layout is pretty cool. They have this black metal-esque logo that is nice but seems superfluous to the layout. The blacklister text conveys the correct feel but the black xerox on black paper is basically impossible to see. I kinda like it but you are going to have to squint quite a bit.
Posted by Demian Johnston at 2:02 PM No comments: 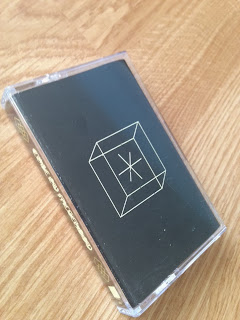 I don't know too much about this release or how I acquired it but i'm pretty stoked I have it. Dark drones buried beneath broken piano lines create a unnerving experience for the listener. I don't have much to say other than I really enjoyed this piece. I would look for this one.

The layout is simple, dark and really well done. It's done by Kevin Gan Yuen (Sutekh Hexen) so I know it was in good hands. The text is illegible or Cvlt if you will. Seriously though, excellent work all around.
Posted by Demian Johnston at 1:50 PM No comments: 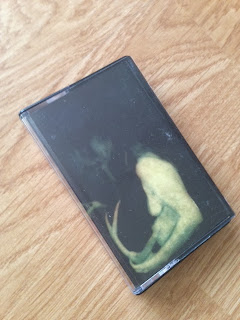 Pretty much straight up drone from Seattle's Paintings for Animals. I've had the pleasure of playing with them a few times and the work has always been really excellent. This cassette captures them quite well. There brand of drone has a much more organic and reserved feel. I am glad to have had a chance to hear them recorded.

The layout is nice but the printing is pretty bad. I can barely read any of the text and that bugs me a little. The photos are great though and the overall design is well executed so I'm not really complaining.
Posted by Demian Johnston at 1:49 PM No comments: 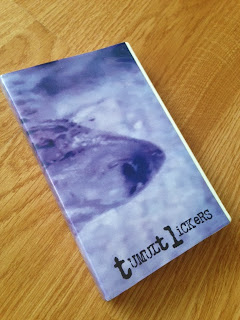 The packaging and layout are awful. I can't tell if there is a label that put this out the bands each get a side but on the Black Cum—or Black CrUMbs—side all of the songs are listed. It's just makes no real sense and is bad design. There is a rubber cockroach inside though and that was fun.
Posted by Demian Johnston at 1:47 PM No comments: 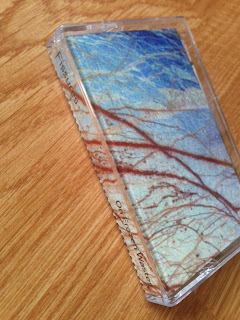 This is a very inconsistent release for me. It's at times brooding and full of that beautiful anxiety I look for and at other times, it's just unfocused and kinda boring. I think the lack of focus really shines unfortunately. There's samples and drums and feedback and guitar playing and textures…  they are all fighting all the time. There isn't that sense of purpose that I find even in the most abstract HNW. When the acoustic guitar came in on the second side I was out. I would like to see a little more from this group. I get that sense that this is probably two guys that haven't been doing this very long. I bet it gets much better.

The layout is fine. Nothing to exciting. I would have loved to have seen it without the fold lines printed on the spine. That was either a mistake or just a bad choice.
Posted by Demian Johnston at 1:47 PM No comments: 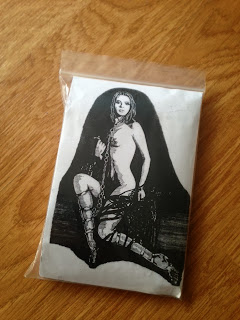 Fucking awesome. La Mancha del Pecado always has good output but this collaboration with Culver is brutal. A single sided cassette full of blistering drone that gets in and gets out. I'm not a fan of single sided cassettes. That kinda bums me out a little. I would honestly rather the program just repeat on the second side but every time I get one it's always real good. Thanks guys. I love rewinding constantly.

It's not much to look at but it does it's job well. Packed in a resealable bag it has a line drawing of a beautiful girl in casual bondage with simple typewriter  text on the back. It works.
Posted by Demian Johnston at 1:46 PM No comments: 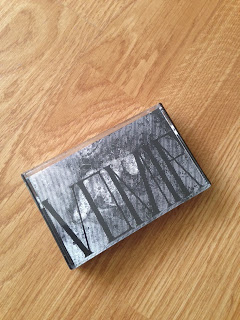 This is what I needed. Brutal HNW. This has that sort of blown speakers/hollow tree sort of HNW sound. I assume you have heard Vomir before and you understand how brutal this shit is. It's like a palette cleanser for a shit day.

Simple layout with minimal text and information. I really dig the logo on the cover but aside from that there isn't much to talk about.
Posted by Demian Johnston at 1:09 PM No comments:

L'Eclipse Nue "Because I Hate You" cd

L'Eclipse Nue
Because I Hate You
Dorei Recordings 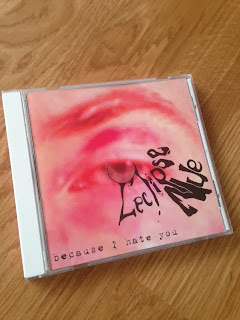 I don't usually do negative reviews. I don't really have the muscles for it. I can be critical of elements of something but it's rare that I decide to write about something that I really, really don't like. In this case I decided to go ahead. That said, I really, really don't like this. In fact I don't think I have ever disliked something sent to me this much. It has some good parts; the logo is cool and the music by itself isn't horrendous. It's the vocals, the vocals ruin it. It teeters on rap most of the time. Sort of like MC 900' Jesus but way worse. There is constant singing. Whether it's being spoken or terribly screamed the vocals never seem to stop. I have to be in awe a little at how many words this person decided to write down and then sing. It's amazing in a way. The delivery of the lyrics are bad but the lyrics themselves are just horrible:

I'm dressed in my new uniform,
Neatly pressed,
Got the crest
of an eagle on my breast.
Unimpressed?
I don't care less
if you detest me,
Because it's my duty to serve and arrest.

He says this part, this chorus, about five hundred times. The parts that you think might rhyme do and it's worse than it sounds. I played this for a friend and he didn't believe this wasn't me fucking with him. That's how bad that particular song is: my friend thought I wrote and recorded an intentionally bad song for him. This song sounds like a punchline for one. It's also an awful ear worm that lays eggs and never lets go. I was singing it in the shower this morning and I got even angrier at the person who decided to perform this. I guess that's a victory for the artist. He did call the album Because I Hate You. Obviously he really does.
Posted by Demian Johnston at 1:07 PM No comments: 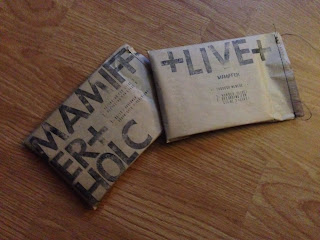 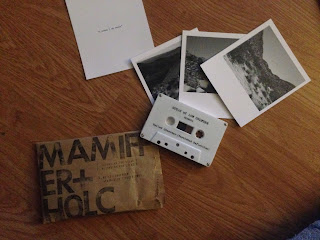 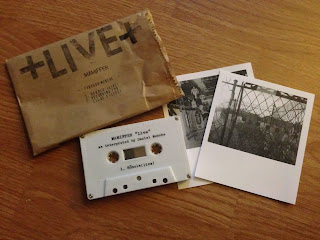 Two really wonderful new releases from the minds of Faith Coloccia and Aaron Turner. The first cassette is a split release from these two with two different faces, House of Low Culture and Mamiffer. Both projects are essentially these two but Mamiffer is definitely Faith's and HOLC is definitely Aaron. They are both so talented and lend so much good work to each other. I am rule inspired by these two. They live on Vashon Island just outside of Seattle. It's a short ferry ride and quick drive from downtown Seattle but it feels like you are in the middle of nowhere Washington. Like a small concentrated drop of Pacific Northwest. They seem to have channeled the intensity and beauty that is the PNW into their music and art—I have first hand knowledge of both—and it's almost nourishing for me. The first release is a split and the sounds move from distant chilling guitar accompanied by an all too present assault of texture to more abstract noise but with a real sense of shape and size. It's gorgeous. The second release is live Mamiffer tracks that have then been reinterpreted by Daniel Menche. I gave a past release of his a pretty poor review but make no mistake, this man is a source of so much inspiration for me. I saw him open for Massonna and Merzbow years and years ago and was totally blown away. he played tapes and a bucket full of rocks and it created sound that completely overtook me. I think he was the first to really capture what the PNW sounds like in the framework of experimental and noise. I highly recommend both of these releases. The packaging is perfect and beautiful. I am never a fan of having to destroy packaging to get to your media but this process—carefully removing stitches—was well worth it. I am constantly inspired by the time and care these two musicians and designers take with their work.
Posted by Demian Johnston at 1:04 PM No comments:

So here's the scoop.

Things have been crazy for me lately. I have been working constantly, trying to raise my kids, teaching/assisting with letter press at the School of Visual Concepts, writing music in both Blsphm and Great Falls and trying to get things out through Dead Accents. I have also been trying to start a new career in graphic design. I've been a bit swamped. I'm also poor as shit, so the stress levels are through the roof. It's a crazy life but I'm trying to get through. All of this nonsense and not-really-nonsense-at-all is the reason that I have been unable to get many reviews done for Dead Formats. I am starting to get some more going though. This month I will do my best to get everything that I need to review up and ready to read. It's a lot of stuff but if you have taken the time to send me something I will take the time to listen and write about it. After this month though things are going to be slow. I don't want to say that I'm going to stop doing Dead Formats but I will definitely have to keep it way on the back burner. I will do my best to keep things going but it will be slow going. Thanks for reading.
Posted by Demian Johnston at 8:42 PM No comments: