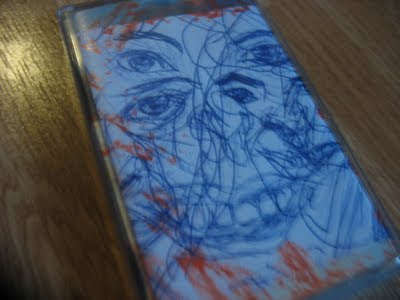 This is real out there. It's starts off with an expertly played yet abstract piano. Is it a loop or sample. Is Mr. Gedalecia playing it as well? I have no idea. It's accompanied by piercing little squeaks and bleeps from old synths. As the piano falls away you get slight, almost ambient tones. Here and there small rhythms come out of the ether of this composition. From there it continues to get weirder but it also gets more amazing. More piano, mandolin, electric piano, shortwave radio and maybe a group of people all add to the odd choir of this release. It's really quite good. The artwork is spastic and as all over as the music. Recommended.


Update: No samples. No loops. All instrumentation is played by Mr. Gedalecia. Amazing.

Head Boggle - Loudbike Malform (excerpt) by Headboggle
Posted by Demian Johnston at 10:21 AM No comments: 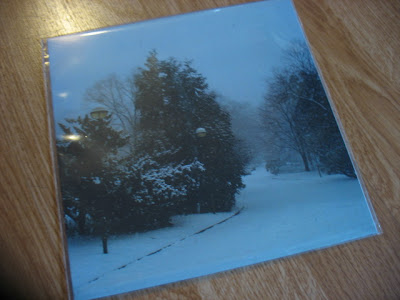 This is all destruction. Flesh Coffin's "seeing things" sounds like the inside of a tornado. Broken metal lawn furniture, giant uprooted trees, millions of shards of glass all swirl around you. It's unrelenting and intense until you get a short break. Things feel like they have settled, like you could try to gather your belongings. Then it hits again. It's pretty tough. This c30 is an excellent example of No Visible Scars' output. It's harsh, unsettling, and focused. Packaged in their usual 7" sleeve with full color inserts.
Posted by Demian Johnston at 9:56 AM No comments: 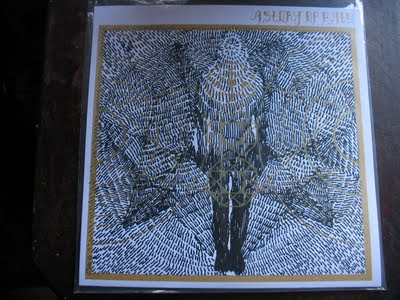 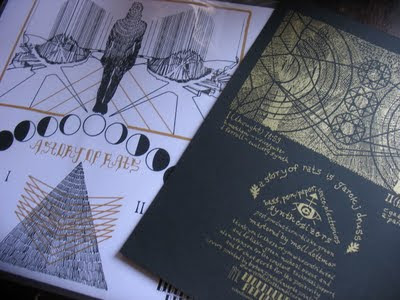 Well, I guess it's about time for the best record of the year to come out. A Story of Rats first voyage into vinyl is sure to not be the last. This beautifully packaged, pressed and printed 12" from Eiderdown is absolutely crucial. Beautifully crafted drones and subtle ambience creates two epic soundscapes. Garek Druss has been known for his work with Tecumseh, Wolveserpent (Pussygutt), This Blinding Light and also as half of Seattle's Dull Knife. His output is pretty impressive and with his (mostly) solo project, A Story of Rats, he has released some very excellent work in the last couple years. Specifically his most recent cassette, Relinquishment, on FSS records really garnered a lot of well deserved attention. This full length seems like what that cassette had been building towards. Eiderdown is one of the Kickstarter success stories and we are glad for them. Their upcoming roster looks incredible but this first release is going to be a tough one to top. Highest recommendation.
Posted by Demian Johnston at 1:01 AM No comments: 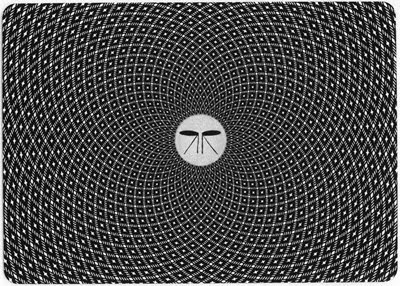 So I really wanted to review some of Timm Mason's (Mood Organ) "Calcinatio" series of cassettes but the scale of his project is too hard to categorize. Kraut rock, Noise, Drone... There is too much going on here to be able to sum up in a few words so I decided a short interview with the man himself might help you to all understand. Enjoy.


1. So what exactly are you doing with these cassettes?

"Visiting A Burning Museum" (cd on Debacle Records) took something like 8 years from start to
completion. After it came out, I was working on a follow-up - "The
Lost Levels", which I hope to release this year - and I started
getting really bogged down mixing these extended compositions with
dozens of layers of audio. I was also conscious that there was new
sonic territory I wanted to annex, and that required me to build up
some new skills. Around this time I was listening to a lot of Raymond
Scott & Delia Derbyshire and also some 7"s that I really liked
(Organum, HNAS, John Wiese). It got me thinking about shorter
compositions.

One morning I woke up with the observation that there are 52 weeks in
a year and 52 cards in a deck. I am interested in this idea of
treating the studio as an alchemical laboratory & this series seemed
like a reasonable analog for the Calcinatio process - a slow, steady
heating to remove impurities. Each tape is a drop of my sweat. 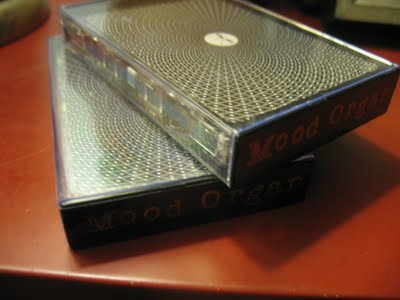 2. I was under the impression that you were originally doing a
cassette a week, is that still the plan?

After a few months, it became painfully clear that one cassette a week
was not going to be possible given my other commitments. I did
complete one cassette every 2 weeks during Year One, to the day
(2/26). I took a couple of months off to pull my life together a bit
& digitize all the tapes from Year One. This week I have resumed the
project. If all goes according to plan, it will be complete
2/26/2012. 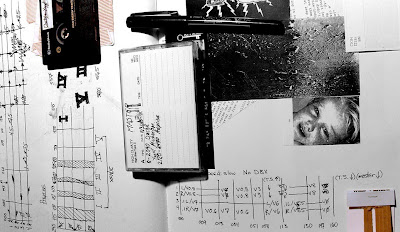 3. Is the music on these cassettes all original?

Yes. Most of it is conceived and recorded as fast as I possibly can.
A few of the tapes use older, unreleased material, but they have new
edits / mixes / whatever. 5 Clubs is one of the first recordings I
ever made (2001) and it is a sort of remix of "Let's Stay Together" by
Al Green… in the sense that Lucier's "I Am Sitting In A Room" is a
remix… is that original?

4. The packaging for each tape consists of a Mood Organ playing card
and a case. Do the tracks correlate to the card for any specific
reason? Did you finish a track and think, "yeah, that's the 3 of clubs
right there?"

When I'm about to start a new tape, I draw a card from the deck. The
card may suggest an approach; it may not. 4 Hearts, Q Diamonds, 2
Clubs - these are examples where I feel that there's a link that's
fairly literal, if only to me. Others might use the card in a subtle
way - maybe 7 Spades has a 7-based rhythm in there somewhere, say.
Many have no connection that I'm aware of.

To answer your question in a different way, the tracks correlate to
the cards for the same reason that today's lottery number correlates
to today. What's important is that a correspondence is created, which
will allow for a chance-based live megamix when the deck is complete.
Cassette solitaire. 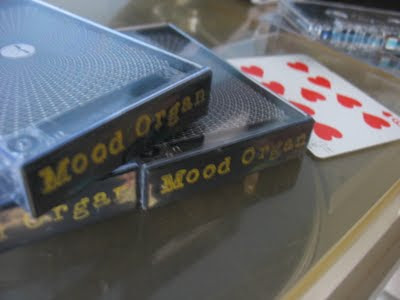 5. Is there any plan to reissue the tracks in another format (vinyl, cd)?

I'm talking to a label about doing a CD compilation of some tracks
from Year One. It's possible I might do the complete collection on a
thumb drive once it's all over. Also, I'm hoping K Hearts side B will
be a split single with Tom Tom Club some day. I'm open to ideas.

6. If someone was interested in contacting you to purchase a cassette
where can they find you?

I really encourage buying a few as they're relatively short (~13
minutes) and differ quite a bit. I will cut you a deal.

7. Being so fucking busy all the time with at least three projects
that i can think of right now, how do you find the time to record
anything?

It's tough. I've had to sacrifice a lot of things I'd like to do. I
wouldn't say I lead a balanced life. A lot of the Calcinatio material
was recorded late at night.

8. Where did you get the playing cards?

They were printed by http://www.hotpromo.com/ and they did a fine job. 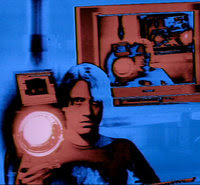 Posted by Demian Johnston at 10:50 AM No comments:

Wizard Smoke "The Speed of Smoke" 12" 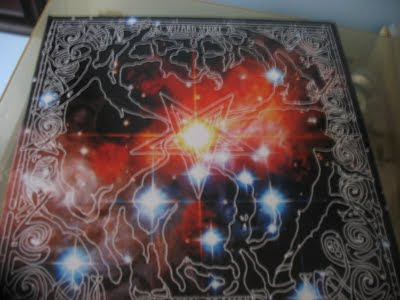 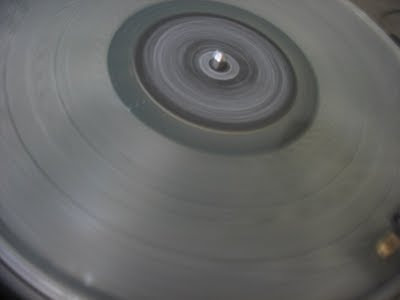 Wizard Smoke
The Speed of Smoke
Self Released
(3)

I had never heard of Wizard Smoke when I received this and I gotta say I sorta chuckled when I saw the name. I expected some southern rock with tons of weed references. When I got into the record though I gotta say i was pretty surprised. It definitely has a southern feel throughout but there are moments of almost Hawkwind inspired psych and a vocalist that has more in common with black metal singers than with John Garcia. It's actually a pretty cool mix in a 90's Southern Doom Metal sort of way, similar but not exactly like Burning Witch at times. I think this is a band that could fit in nicely in the Southern Lord roster. Although there are a few issues I am not too excited about though. There are some pretty out-of-nowhere vocoder tinged vocals that totally feel out of place. I can't imagine someone in the studio thought that the vocals needed to sound like Styx before it got back to sounding like Buzzoven. Wizard Smoke is awesome enough when they are just blazing through their tracks raw and intense. They do not need any tricks. The record looks pretty great although wherever the jacket was printed doesn't seem to do the best job. It feels kinda flimsy and cheap but the vinyl may be the clearest vinyl I have ever seen. I would suggest checking out this whole record if you get a chance.
Posted by Demian Johnston at 12:11 PM No comments:

Email ThisBlogThis!Share to TwitterShare to FacebookShare to Pinterest
Labels: 3 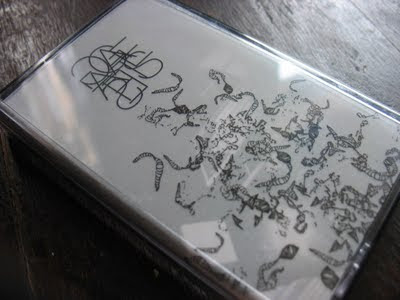 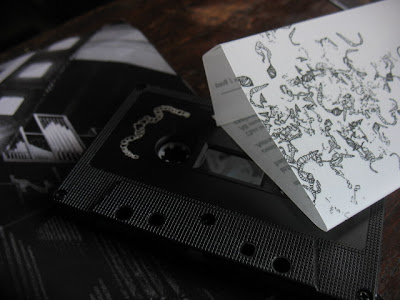 I feel that when a lot of kids first got into Sunn0))) they probably saw how cool their records looked, how valuable they seemed to become on eBay, realized that it essentially was two guys with lots of amps and guitars and thought to themselves that they could do that just as well. This mentality produced a wave of doom drone a few years ago that, despite a few exceptions, was pretty awful. This is the same mentality that produced a ton of mediocre comics in the late 90's of people thinking that if you drew all scribbly, you could draw just like Dave McKean or Bill Sienkiewicz (I was definitely guilty of that). Luckily for me and those who have discovered Gates do not have to suffer through subpar ambient doom inspired drone. Although I feel i can definitely hear a Sunn0))) influence, Bryan W Bray is quite adept at creating his own unique soundscapes that range from very heavy and intense to subtle and contemplative. This cassette is some of the best work I have heard from him so far. Brutal and beautiful all at once. I would hunt this down immediately. The packaging is really nicely done as well. A pro printed double sided card with a wrap around piece of printed vellum. Excellent work from my new favorite Canadian.

Posted by Demian Johnston at 10:00 AM No comments: