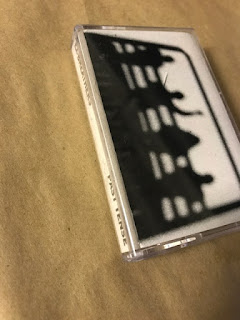 Okay. Let’s definitely talk about the music first because I have some comments about the layout of this. So musically this rules. This is right in line with so much that I love. This lives somewhere in the world of Craw (favorite band of all time), Hammerhead, Unsane, Scratch Acid, Birthday Party, Steelpole Bathtub, Fugazi, Guzzard, Chokebore… you get the idea. All the amazing noise rock that fucking ruled. The stuff that later gave you amazing shit like Ken Mode, Akimbo, Doomriders, Young Widows, Death Engine, etc. Anyhow, I really like this. It has just enough mathy changes to keep it interesting but it also completely rocks. Definitely if you are a fan of the Craw album, Bodies for Stromium 90 you will dig this. I think I even like this a little better than that Craw album… I will have to think on this though. That’s very high praise.

Now the layout. What happened here? It’s simple enough and that’s fine but why are the lyrics in 2pt type (see picture)? I know the answer to that is that you needed to fit them on the 3 panel j card but here’s the thing. You don’t have to do that. This type is aggressively tiny. It’s almost unreadable to anyone who doesn’t have a loupe. On top of that there is an entire second side to the J card that is totally blank. I get that cost is an issue when making cassettes, you don’t really make much on them and they don’t sell great but just don’t include the lyrics. It’s fine, put them online or something or just don’t worry about them. These are so small that they really might as well not be on there. I would say, as a rule, for now on, no one should use type that is smaller than 4pt ever and if it’s something you hope for a reader to indulge themselves in I would so no smaller than 6pt. I have a small laptop and when I design I often have to zoom in to see what I am working on. It gives me a false sense of legibility. I have been the perpetrator of this a few times myself and that is why I am passing this criticism down. That all said though, you absolutely need to find this record in whatever format it is available in. I am going to try to see if there is vinyl because this belongs in the library. 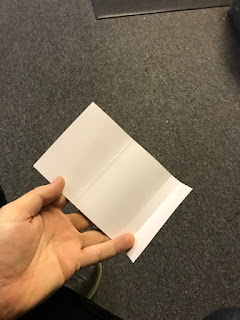 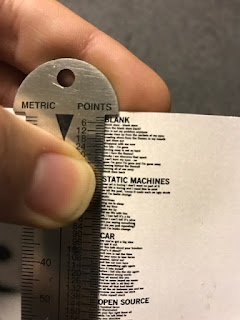 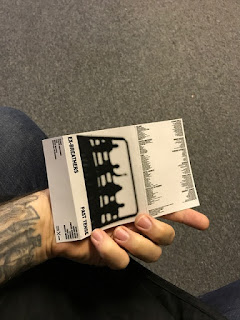 Posted by Demian Johnston at 10:26 AM